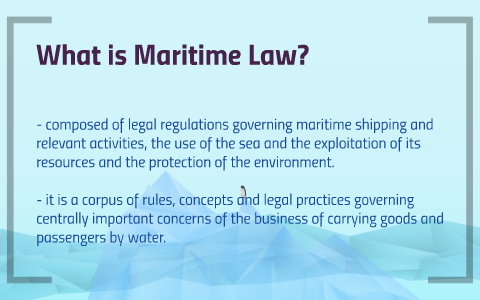 Maritime law applies to all ships in international waters. The country in which a ship is registered determines its nationality. Typically, this is the country where the ship owner resides or operates a business. However, some ship owners choose to register in a foreign jurisdiction to avoid taxes or to take advantage of lenient local laws. Examples of such countries include Bermuda and Panama. Further, these nations also have many important and enduring laws relating to maritime law.

In addition to domestic laws, maritime law also deals with international disputes, such as piracy and criminal activities. Other cases that fall under maritime law include wake damage, towage contracts, and wrongful death claims. In recent years, an increasing number of recreational boating accidents have been resolved in court. Regardless of the location of the accident, the ship owner may be liable for damages caused by negligence, or mismanagement of its crew.

Maritime law covers various factual scenarios that may arise on the high seas. The most common are the Jones Act and the Longshore and Harbor Workers’ Compensation Act. In some cases, the JonesAct only applies to “seamen,” but other types of workers may fall under these laws as well. In South Africa, the Admiralty Jurisdiction Regulation Act, No. 105 of 1983, serves as the battleground for these actions.